Sport and Education together in Europe – change of status quo! Majority of European universities are very indifferent to organized and systematic sport activities under their own authority. There is a very small amount of sport culture in Europe because of the open underestimation from the side of academics! In order to start fulfilling a very bright and intelligent idea of Dual career of talented athletes. We need to change mindset of our universities which, many of them, have stayed mentally in the first half of the 20th century. It was during that ear when many young athletes were very often told: “You have to choose between competitive sport and tertiary education! …but you can’t do both!” European universities very often cannot see the positive aspect of bringing regular, good quality competitive sport activities into their everyday life and support the students, representing the universities through their university teams, in their studies by offering flexible curricula. Here we can see a big difference between the European and US approaches towards University and College sport support. This project shows the good and sustainable example of promoting dual careers at the European universities in 21st century and tries to shift this know-how to as many universities as possible. This good practice is called European University Hockey League – EUHL, the first ever Pan European fully amateur sport league, and has been operating for the last 4 seasons in 4 countries and around 25 universities. And of course it is applicable to any competitive university sport. For most of the ice-hockey players and globally for all athletes at this age further education at university pathways is not an option but decision: “continue playing or drop out of their the sport” Right now in European Union are over 120.000 athletes and only 2% of them will became professionals. 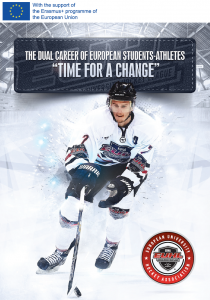